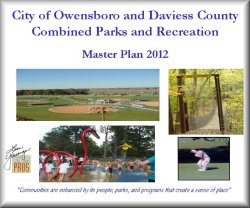 Public Parks & Recreation is the subject of Section 640 of the Comprehensive Plan for Owensboro, Whitesville, and Daviess County, Kentucky. The OMPC adopted an update to Section 640 on February 8, 2001, which included an updated park needs assessment that was based upon national standards and guidelines developed in 1983. In early 2001, the most recent public parks and recreation plan for Daviess County was the one that had been prepared in 1976. As a result, in the updated Section 640, the OMPC recommended that the City of Owensboro, the City of Whitesville, and Daviess County jointly appoint a committee to identify community needs and oversee preparation of a parks and recreation plan for Daviess County and to incorporate park needs into a capital improvements program process.

In 2001, the City and County jointly worked with consultants Leon Younger & PROS and ETC/Leisure Vision to produce a new parks master plan. Daviess County Fiscal Court adopted the plan on February 21, 2002, and the Owensboro Board of Commissioners adopted it on May 21, 2002.

The consulting team toured existing parks and recreation services in Owensboro and Daviess County to identify current challenges and issues facing both city and county parks and recreation departments and to develop vision action strategies to provide an overall direction for the future.

Community input was received through various focus groups composed of business and community leaders, public forums throughout the city and county, partnership meetings with local agencies and businesses, and phone and mail surveys to 4,000 households. Recommendations were formulated to drive the goals and management of the both recreation departments until 2012.